🚀 We’re thrilled to announce our $17M Series A to expand our staking offer!
|
Learn more

Stake your treasury directly, or bring staking to your users through our whitelabel product.
Get in TouchLearn More →

Live on 20+
proof of stake blockchains

extensible and secure
staking as a service platform 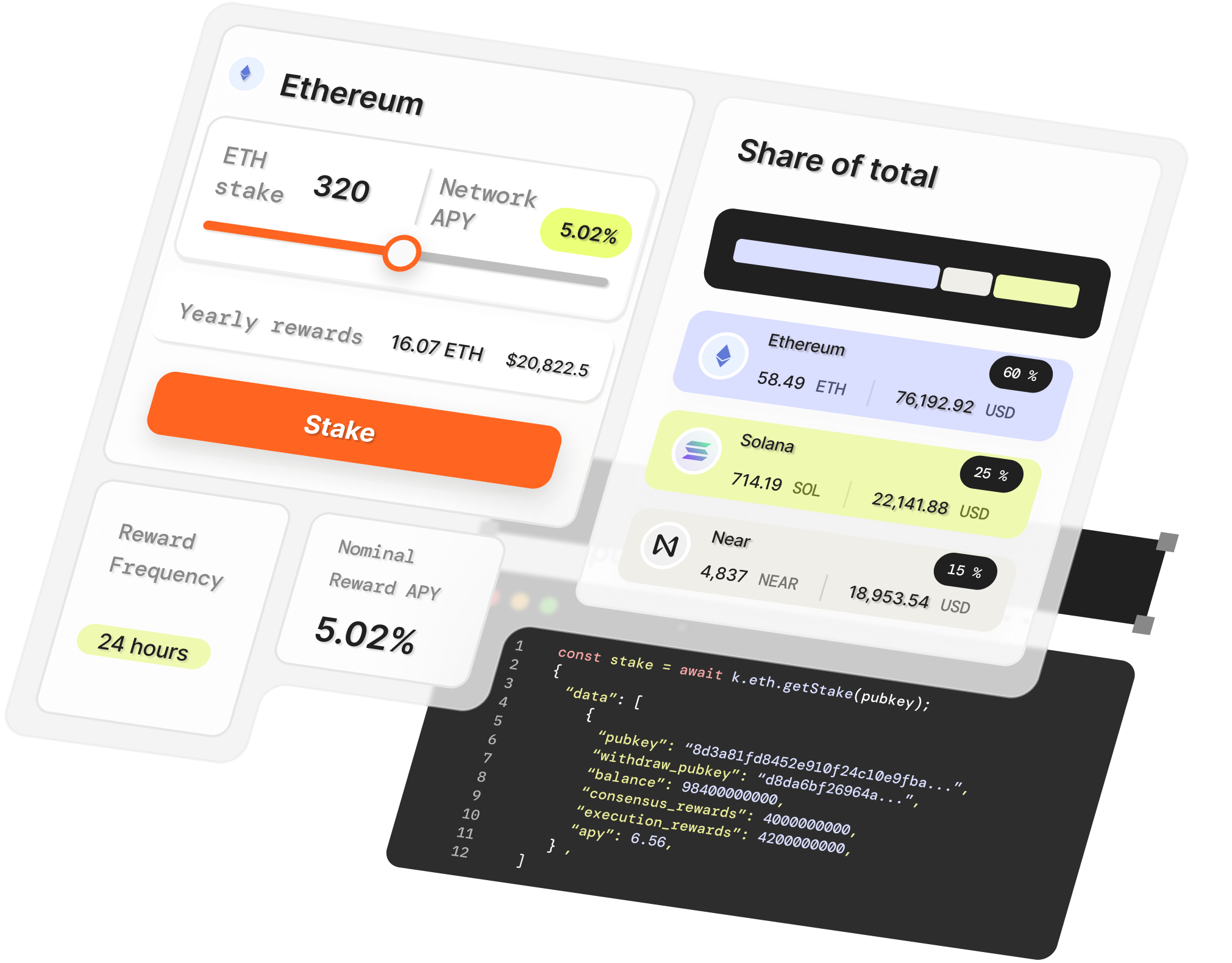 One SDK to integrate staking, rewards data, and your custodian on all major PoS blockchains.

Dedicated or shared validators, with enterprise-grade SLAs, deployed on our multi-cloud Kubernetes infrastructure.

Get in touch
Protocols 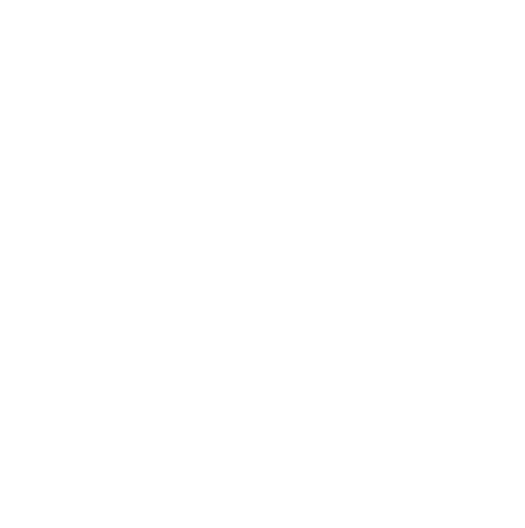 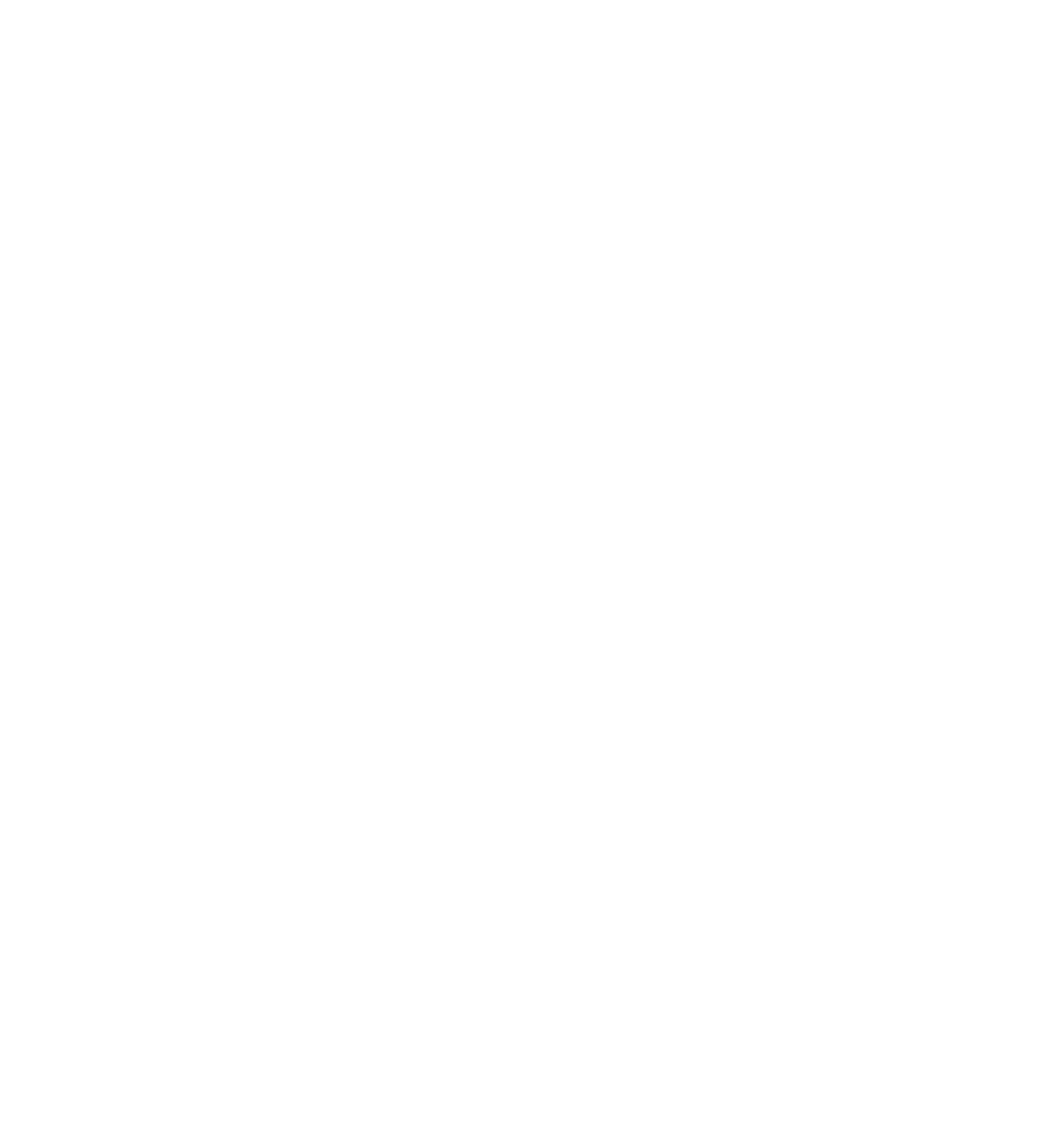 Bring your own custodian

Stake on the Kiln platform while maintaining custody of your assets with your existing solution.

Choose which cloud platform to deploy on and which validator client your validators run.

We offer industry-leading SLAs on validator uptime and rewards earned.

We’re backed by the best

We’re backed
by the best 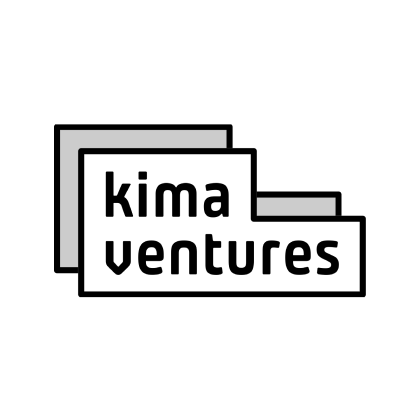 What is staking cryptocurrencies?

Staking cryptocurrencies consists in locking native tokens (e.g ETH) in a Proof-of-Stake blockchain to earn the right to participate in its security for a given period. It’s a way to secure a chain by proposing new blocks or attesting to other validator's blocks to earn rewards in form of additional coins or tokens.

Staking cryptocurrencies is one of the least risky options to grow your assets. At Kiln, we only support protocol staking, in which slashing is the only risk you may need to worry about. Most of the PoS protocols depend on network participation and validator integrity so it is critical to select the right staking-as-a-service provider.

What are the risks associated with staking cryptocurrencies?

Downtime refers to a situation whereby a node is not signing transactions. There are rules stating the degree of downtime that can be tolerated. As such, once a node passes this parameter, it automatically loses its validator status and the staked tokens.

Slashing is a way to checkmate validators staking cryptocurrencies to ensure they do not prejudice the integrity of the network. A downtime leading to upsets in a protocol's network can warrant slashing.

Double-signing is another popular reason and usually occurs when a validator, either knowing or unknowingly attempts to validate a block more than once. In some cases as in the Ethereum network, some or all of a validator's staked ETH can be slashed for confirming or proposing fraudulent blocks.

Generally, when a validator node acts in a way that could weaken the smooth running of the network, they stand to lose between 5% to 20% of their staked crypto.

How does Kiln mitigate risks associated with staking cryptocurrencies?

Since it began operations, Kiln has never been slashed. Its fame as one of the most reliable staking-as-a-service providers sets it apart in the $1.2 trillion cryptocurrency market, especially in terms of minimizing risks.

This is mainly because Kiln has a team of 25+ experts monitoring and maintaining its nodes. These certified engineers set up a robust process to analyze all signals to prevent any downtime or slashing.

If you'd like to learn more about how they monitor staking infrastructure at scale, please check this article.

Staking generates the safest and most predictable yields in the crypto space. When you stake your cryptocurrencies, depending on the protocol, you can earn from 4% to 60% Annual Percentage Yield.

How does Kiln guarantee rewards through staking cryptocurrencies?

If you are eligible, you'll automatically start earning rewards on your Kiln dashboard. To guarantee our clients the highest rewards at Kiln, we have a 99.95% effective uptime, the highest level of monitoring, and a coverage policy to protect you against slashing events. We have deployed thousands of nodes, making Kiln one of the most reliable staking providers.

What is a Staking-as-a-Service (Saas) platform?

A Staking-as-a-Service platform enables investors to stake their Proof-of-Stake protocols via a third-party service that takes care of the technical aspect of the staking process. Staking remains complex for many institutional customers especially when they are staking multiple protocols at the same time.

You need to collect rewards, select and monitor your validators, etc. Staking-as-a-Service platforms such as Kiln take this complexity out as you can pilot everything from a single admin dashboard. It saves you time and money.

At Kiln, we have a team of 25+ engineers dedicated to deploying, monitoring, and maintaining tens of thousands of validators on all the main PoS chains.

Enterprise-grade isn't only a marketing team but it helps people to distinguish between products meant for businesses or end consumers.

According to Gartner, enterprise-grade describes products that integrate into infrastructure with a minimum of complexity and offer transparent proxy support.

At Kiln, we believe that enterprise-grade is defined by productivity, scalability, security, and compliance and we put a lot of effort into making products that allow these.

What is Kiln about?

What are Kiln Staking-as-a-Service products?

Kiln has an entire suite of staking services designed to work together or separately, making it easy to expand your staking offering. Our admin staking dashboard makes it easy to view, track, bill and automate all your stakes in one place. We offer direct and white-labeled staking through our API solutions.

Who are Kiln’s customers?

As the leading enterprise-grade staking platform, Kiln is supporting a wide range of institutional customers such as custodians, wallets, exchanges, market makers, funds, banks, and anyone dealing with cryptocurrencies.

How many blockchain protocols does Kiln support?

Kiln's Staking-as-a-Service platform supports the most important blockchain protocols that include Ethereum, Solana, Polkadot, Cosmos, Tezos, Near, Avalanche, etc. For any specific inquiry, please contact our team at support@kiln.fi

What is a blockchain validator?

A blockchain validator is someone that participates in a consensus and is responsible for verifying cryptocurrencies transactions. Although anyone can launch their validator, it is a complex process and therefore most businesses choose to use a staking-as-a-service provider to mitigate risks.

Yes. Kiln has a team of more than 25+ engineers dedicated to deploying, monitoring, and maintaining thousands of validators on all the main PoS chains. We are managing all our validators in-house.

Where Kiln hosts its running validators?

We work with different cloud-providers such as Cloud, AWS, GCP, Azure, OVH or Scaleway.

What is Kiln's track record?

We have over $400m stake under management, with a particularly strong track record on Ethereum. We are already helping the most important Web3 players such as GSR, Ledger, Flowdesk, to stake their own assets or the one of their clients thanks to our API-first solution that enables fully automated validator, rewards, and commission management.

Do I maintain custody of my tokens?

You can maintain custody of your assets through any wallet or custodian solution of your choosing. Kiln’s staking platform is non-custodial, only you can access your funds by controlling the underlying wallet which holds a claim to the funds.

What are Kiln’ service-level agreements (SLAs) for its institutional customers?

Kiln guarantees to its clients and partners a specified level of rewards on each blockchain protocol staked. In terms of compliance, Kiln has achieved SOC 2 Type I compliance in accordance with the American Institute of Certified Public Accountants (AICPA). Moreover, to prevent any slashing risk, Kiln, in partnership with Nexus Mutual, offers a coverage policy to protect against middle slashing events.

How to select the right Staking-as-a-Service platform?

Choosing the right service provider is a complex decision that requires various considerations. At Kiln, our operations are driven by a tripod value system of reliability, compliance, and support.

Among others, Kiln is SOC 2 certified. We are a recognized European player with offices in Paris and London. Kiln has a team of engineers and sales working 24/7 to maintain and monitor our validators without interruption. Each customer has a dedicated Account and Product manager available at any time.

How does Kiln manage security?

At Kiln, we take security very seriously and we follow closely each supported protocol and make sure our customers are always up to date in terms of protocol upgrades and security best practices. Please click this link for more info on our security infrastructure.

How much does Kiln charge for its services?

Our fee can vary based on the rewards that we earn on behalf of our clients each month. However, discounts are available upon request for our largest cryptocurrencies holders.

How do I get started with Kiln?

You just have to complete our form and go through Kiln onboarding to gain access to our suite of staking products.

Kiln is SOC 2 certified as audited by Prescient Assurance